Skip to content
Are GMO crops bad for the environment?

Are GMO crops bad for the environment?

Are GMO crops bad for the environment?

By now you’ve figured out that there is a debate about many aspects of GMOs, such as GMO labeling, domestic and international GMO bans, and the complicated relationship between GMO-free and organic foods.

So, it should come as no surprise that the debate gets equally heated when talking about the impact of GMOs on the environment.

So are GMO crops bad for the environment? Well, it depends on whom you ask.

Opinion 1: GMO crops ARE bad for the environment

One Green Planet, an online guide to making eco-friendly choices, cites some problematic environmental concerns with GMO crops. They claim that:

1) The chemical pesticides and herbicides commonly used with GMOs have toxic properties that are harmful to the surrounding ecosystem.

Pesticides and our food are more connected than you think. The initial purpose for creating GMOs was to create seeds that were resistant to pesticides. Pesticides are important for some farmers to keep their crops safe from insects and weeds. However, since scientists began genetically altering seeds to be resistant to the pesticides, the amount of pesticide needed has increased. The main culprit, glyphosate, has been used as a broad-spectrum herbicide, meaning it kills all vegetation it’s sprayed on, since the 1970s, according to an article on Environmental Health News website. The article states that compound has been found to alter the metabolism of the animals around it, and to accumulate in the soil. 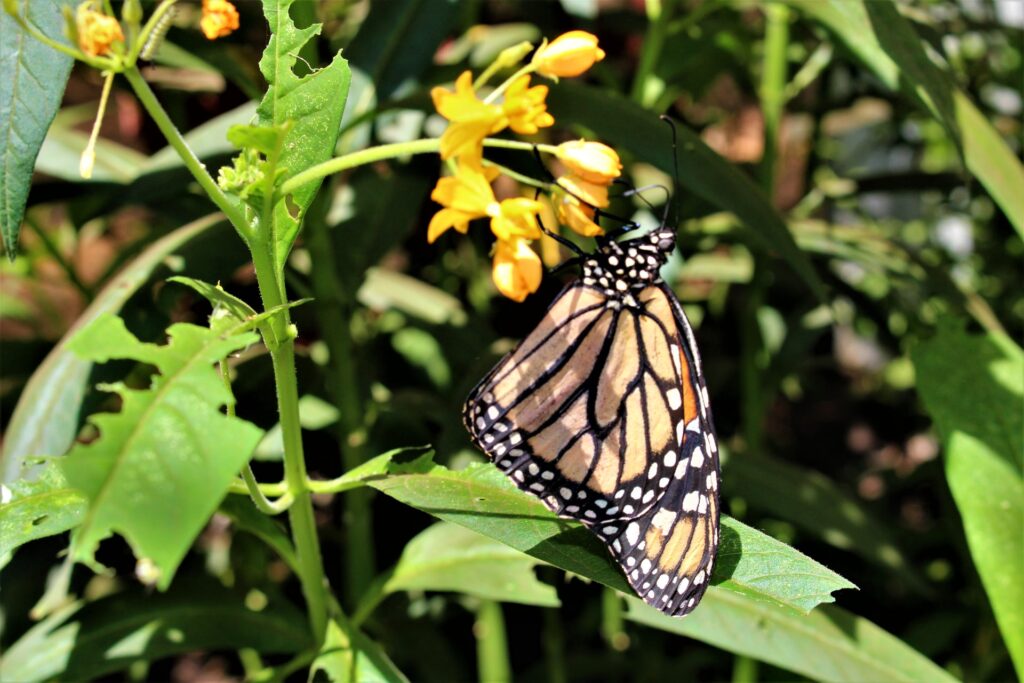 Photo by Jessica Sloan on Unsplash

2) The toxicity of these pesticides are causing bees and monarch butterflies to become endangered, and are putting birds and other wildlife at risk.

Several countries in the EU, including Austria, France, and Germany have banned the use of glyphosate, the main ingredient in Roundup, with other countries close behind based on evidence that the compound is adversely affecting key animals.

3) Weeds that are targeted by the glyphosate are developing a resistance to them, meaning the pesticides won’t always be effective.

According to the article “As Weeds Outsmart The Latest Weedkillers, Farmers Are Running Out Of Easy Options” by NPR, a strain of pigweed has emerged in the Southern states which appears to be resistant to all forms of herbicide. This has the potential to suffocate crops in the fields, and require new forms of pesticides, though the article highlights the fact that new pesticides have not been developed since 1984. So, even if GMOs foods themselves are not harmful, the pesticides that are necessary for the crops are.

4) GMOs put biodiversity at risk because they are planted in a monocrop fashion with heritage seeds no longer used. The growing process then becomes dependent on GMO seed, chemical fertilizers, pesticides and herbicides to grow a single crop.

Many people, disappointed and fearing the demise of heritage varieties of plants, have started seed banks and libraries to sustain less common strains of crops, including individuals like Babita Bhatt. Bhatt started a sustainable food business called Himalaya2Home to help connect her urban counterparts to the types of foods she grew up with in her rural community. Citing some of the reasons for starting her business, Bhatt states in The Guardian that, “Rampant use of pesticides and tampering of seeds through GMO further sounded the death knell of many indigenous seed varieties that had medicinal and curative properties.”

5) Toxins from the pesticides are released into the soil affecting the soil and nutrients. Irrigation carries the pesticide all of these problems into water sources and the air, potentially ending up in compost, animal feed, and groundwater, transporting it to other organisms.

According to the Swiss journal Plants, glyphosate has an affinity to bind to soil particles and thus mostly accumulates in the topsoil layers. Processes like surface runoff, drift, and vertical transport in soil may transport it to groundwater, surface water, and water sediment. The journal states that traces of glyphosate were found in over 39% of the water samples tested in the Midwestern United States.

An article in AgMag, which features an interview with author and food activist Michael Pollan, states that GMO crops haven’t done what seed and chemical companies such as Monsanto claimed they would do. GMO crops were supposed to make agriculture more sustainable, improve yields, reduce pesticide use and make food healthier.

Instead, he says the only outcome of GMO crops is that they’ve been engineered to resist glyphosate, a key ingredient in Roundup herbicide. And as a result:

Opinion 2: GMO crops are NOT bad for the environment

Many proponents of GMOs have positive things to say about GMOs’ impact on the environment. They claim that:

This was proven to be untrue for a while, though new studies are showing that the tide is beginning to change.

Photo by James Baltz on Unsplash

The most recent research shows this may be true. According to a study published by Emma Kovak and Dan Blaustein-Rejto from the California-based eco-modernist think tank the Breakthrough Institute, up to 7.5% of the total greenhouse gasses emitted by the EU could’ve been eliminated with the use of genetically modified seeds.

3) GMO crops help conserve water because their herbicide and drought tolerance aids in soil moisture. This means farmers don’t have to irrigate as often.

No evidence of a link between water conservation and the use of GMO seeds is apparent from reliable sources, though shadow biotech interest groups like AgWired continue to make conservation claims.

4) GMO crops have reduced the need for pesticide applications.

As mentioned above, the need for pesticides and herbicides have actually increased with the emergence of GMO crops.

Just and Haiser credit GMOs for an increase in corn yields, which has neutralized grain price spikes that were causing food riots around the world. With close to a billion people malnourished and the world’s population only increasing, they say it’s imperative to continue with this technological progress in agriculture. The opinion piece argues that GMOs are likely to play a leading role in helping to increase food production with a lower negative environmental impact.

Feed the hungry around the world? That’s a noble cause and good reason to continue using GMO seeds, especially if the environmental impact is low.

But not everyone agrees with their claims. A 2016 New York Times article argues that the claims that GMOs have increased crop yield are unsubstantiated, and that the amount of chemicals used on crops have actually increased.

GMOs sound like they could do a world of good — decrease a need for water and feed the world’s hungry. But many people disagree with these claims and actually that GMO crops are bad for the environment.

How does the U.S. government fit into all of this? If a crop is genetically engineered to harm insects, the EPA requires that the developer verify that the toxin is environmentally safe and free from allergens. The Environmental Protection Agency (EPA), the US Department of Agriculture (USDA) and the Food and Drug Administration (FDA) all work together to regulate agricultural technology in the US. You can read the regulatory framework on their website.

Do you think GMO crops do more harm than good for the environment? Do you think the EPA is doing enough to protect our environment? Are you concerned about the reported increase in pesticides being used on our GMO crops, or the ripple effect it could potentially have on our ecosystem? Please comment below and let’s get the conversation started!